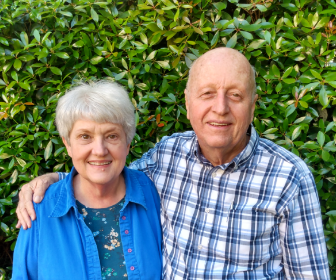 Sixty years ago, when Howard was 8 years old, there were no programs for special needs children like him.  He simply did not fit into the regular mold.   Unable to sit and learn like the other children, he could not keep up with the rest of the class.  His teacher stationed him in the “Dunce Chair” right next to her desk the entire school year.

On the last day of school, however, his teacher bent down and said, “Howard, Jesus Christ spoke to me about you.  I have ordered for you a 6-month subscription to Our Daily  Bread for Children. If you like it and want to continue to receive it, you can order it for yourself.”

Howard liked the little magazine very much.  He read and re-read every issue from cover to cover and sincerely prayed each of the suggested prayers.  Sadly, Howard’s family was not a Christian family, and he was not able to continue ordering the magazine.  But he began to pray that God would save and forgive everybody in the entire world.  For the next three years he was influenced by what he had experienced through that Christian magazine for children.

But his life took a big, bad turn when he was 11 years old.   He describes it as being “corrupted” through the influence of his older teen-aged brother.   He began ‘drinking and drugging.’  For several years things progressed from bad to worse.   When he was about 23 years old, someone slipped a really bad substance into his drink, triggering a major bi-polar/ schizophrenic reaction which landed him in the psychiatric ward.

But a Christian woman in the psych ward gave him a Bible.  As he read God’s Word he reconnected with the One to Whom he had prayed as an 8-year-old boy.  He began praying the “sinner’s prayer” over and over again.  Miraculously, God delivered him from his desire for alcohol and marijuana.  His filthy language and dirty mind simply went away.  Proper medication began keeping his neurological issues within proper bounds.

Now Howard passionately pursues a God-given mission to help other people to come to know Jesus.  He purchases JESUS film DVDs from our Cru Resources office, and he orders New Testaments from a major Christian book distribu- tor.  One JESUS Film DVD fits neatly into one New Testament, and they go into a gift bag along with a printed personal message, including a gospel presentation.

Howard lives only a block away from the famous Walk of Fame in Hollywood, CA. He walks into shops and approaches the clerk at the main counter, asks how many people work in that shop, and offers one gift bag for each employee.  He goes to almost every establishment, even to the smoke parlors and tattoo places.   In advance of going out to offer his gift bags he prays long and hard, asking God to direct him and to open the hearts of the people he will approach.  Rarely does anyone turn down his gift.

Since December 2020,  Howard has ordered 600 JESUS Film DVDs (six boxes of 100 each).   Please pray for him, for those who receive the gift bags, and for our Cru Resources office and the JESUS Film Ministry of Cru as we work together to  provide these resources to Howard and lots of other folks.

Thank you for your partnership with us in reaching many people with the Gospel!