Dan Lane faced a difficult situation.  His father had passed away, leaving Dan’s mother with no financial provision.  Coming from a long line of hearty folks, most of whom lived well into their 90’s, Dan’s mom faced the prospect of living another 25 to 30 years . . . but with no income.

Dan had served as a full-time staff member with Campus Crusade for Christ for seventeen years. He was well-trained and had gained valuable experience while serving with Campus Crusade in the Eastern Caribbean islands, on a university campus in Paris, and in a French-speaking country in Central Africa.

But Dan was also a faithful son who took to heart the Biblical admonition to provide for his mother.

Though he did not leave his passion for ministry, Dan did leave his position as a Campus Crusade for Christ staff member and took a job with Interstate Batteries, employment he has maintained for 31 years.   Through the years, using his Campus Crusade training and experience plus his fluency in both French and Spanish, Dan has made twenty-five short- term mission trips to French-speaking and Spanish-speaking countries.

He plans his trips well in advance and works with an established Cru ministry or another missionary group.  On his most recent trip (to Panama) Dan worked closely with Secundina Buitrago, the Panamanian Cru office manager. She set up speaking engagements for Dan at the University of Panama and at a school that teaches English.

The wife of a local Panamanian pastor prepared a letter of introduction/recommendation for Dan and set up speaking appointments for him in an elementary school and a high school. As the Lord would have it, the elementary school principal, who is not favorable to evangelicals, was away from the school two days, giving Dan the freedom to speak without resistance.

The high school, which has 2,000 students, was happy to let Dan speak. They apologized ahead of time, however, that one of the classes where he would speak had the reputation of being the worst class at the school.  Dan says it turned out to be one of the best groups to whom he made his presentation! 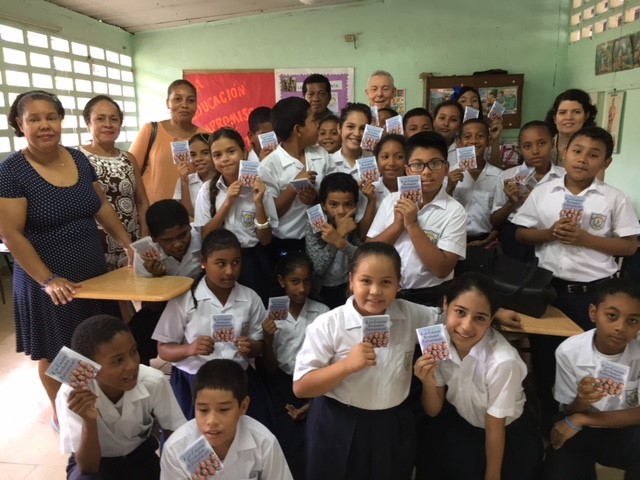 Dan, (on the back row, slightly to the right of center, with the green wall behind him) says that if he wants to be invited to come back to speak at a particular school, he must use a non-religious introduction (focused on values) which leads into a Gospel presentation.  Having only 20 to 30 minutes per classroom, he has to make every minute count, and he says it is a MUST that he leaves a basic follow-up piece for each of the students.

This past April our Cru Resources office assisted Dan in getting over 700 Spanish language copies of evangelistic booklets shipped for his use in Panama. Every student in every classroom where he spoke received one of those booklets.  That included elementary, high school, University of Panama, and a school which teaches English. The children pictured above hold their copies of Las Cuatro Verdades Fantásticas (Spanish children’s version of The Four Spiritual Laws booklet).

Dan is already planning a return mission trip to Panama next year.  In fact, having completed his faithful provision and care for his mother, who passed away last September at the age of 94, Dan is working on plans to move to Panama to continue his ministry when he retires from Interstate Batteries.

How grateful we are for the opportunity to help supply ministry resources to former Cru staff members, like Dan, who continue to use their training and experience to teach children, youth, and adults about Christ.  Thank you for your partnership with us and with Dan!